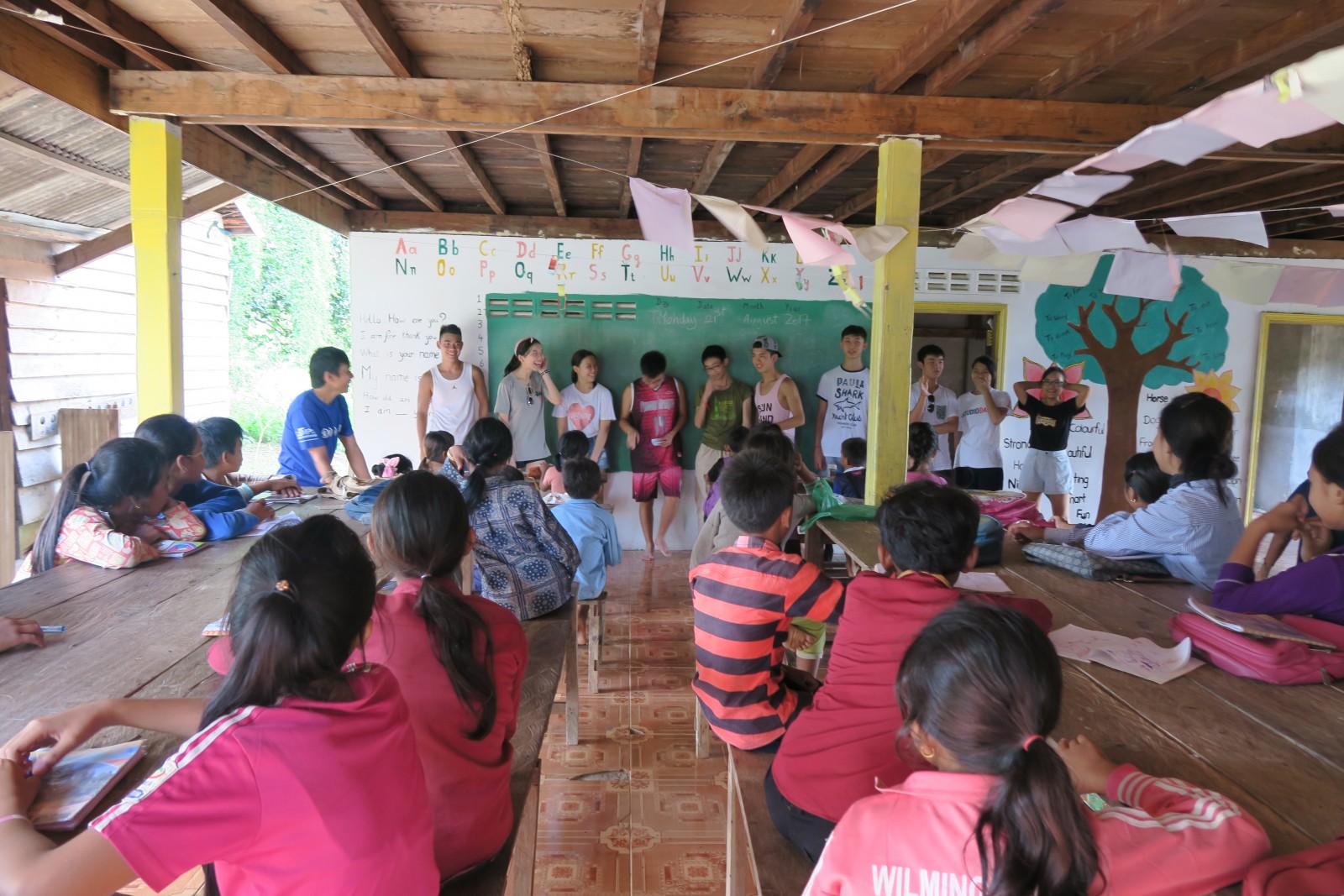 Our students introducing themselves to Cambodian students in an English lesson

From September 25th to Oct 1st 2018, S5 IB students visited Cambodia to do community service work. During our week-long stay, we mainly focused on making toilets for villagers in Phnom Penh. During the course of three days, we made cement rings, laid bricks and dug holes to set up toilets in various homes to improve sanitation for local families.

On the first day of doing community work, my group basically had to deal with cement. We mixed cement with tools such as shovels and hoes and used them to make cement rings and for brick laying. It was really physically challenging as mixing the cement required a lot of strength; be it carrying the buckets of cement to the mould or just mixing it with shovels and hoes. As my group mates were not the fittest in our form, it was very important for us to strategically plan on how to best use our energy without overexerting ourselves. We divided the labour amongst us; some used shovels to mix the cement with water and some used hoes to blend the cement into an even consistency. We also worked in shifts and took breaks to prevent anyone from fainting in the hot and humid heat. Even though the division of labour helped minimize unnecessary energy loss, mixing the cement under the hot sun right above our heads was pure suffering. I remember going for several water breaks in an hour because I was feeling a bit sick when working too long, but I still withstood the heat and worked until the end of the morning session as the work was done by the team and not just by myself. At the end of the day, when I thought of how this hard labour can help improve the health of the villagers, all of the hard work was definitely worth it.

On the second day, our group went to a family's home to dig two holes, one that was 1.4 metres deep and the other 1.5 metres. As I was not physically strong enough to dig up the earth, I was responsible for carrying buckets of earth away from the hole. I thought it would be a lot easier for me to do this task but I was wrong; it was equally tiring for all of my group members. Therefore, we came up with shifts to take breaks, so that we could replenish our energy and continue working at the same time. When the hole was about 1.3m deep, there was underground water coming out from the walls, which made it harder for us to continue digging. Thankfully, one of the local community leaders gave us a tree branch with a nail hammered on the end of it. We then developed a chain system where a person collected a bucket of earth with the branch and transferred it to the person carrying it away. This helped us save a lot more energy to focus on digging the hole. After digging the two holes, we had to put three very heavy concrete rings into the hole to form the walls of the toilet. To do that, we had to put two planks of wood over the hole to secure the ring and position group members on differing sides of the hole to manually lower each ring on top of one another into the hole using a long piece of rope. This required a lot of physical strength and teamwork and should one of us have slipped, the resulting imbalance would have meant the concrete ring falling out of position. It was a really tiring day but if we did not help the villagers, they would do their business in the bushes or in shallow holes only 1m deep which would be washed away during heavy rain. The consequences of this can lead to diseases in the local community as bacteria will contaminate the nearby reservoir which villagers use for multiple purposes. Therefore, it was crucial for us to help build toilets and try our best to improve public health and hygiene in that village.

On the third and last day of community work, we went to a farm to help the farmers harvest their cassava. As they are the roots of a tree-like plant, we had to pull roots out of the ground to harvest the cassava. All of us were divided into groups and responsible for different jobs in the harvesting process - I was responsible for digging up the remaining cassava deep in the soil if the plant wasn't pulled out effectively. Eventually, people from different groups formed groups again to harvest more efficiently, with some students pulling out the plant, me digging the remaining cassava, and some taking the baskets full of cassava to the farmer's trailer. After working for a whole day, we learnt how to pull out the cassava plants effectively so that we could harvest a lot more cassava in one go without having to dig for the remaining ones afterwards. An hour before lunch, I realized I had allergies on my arms from the plants but even so, I decided to still help but not dig the roots out. Afterwards, I was responsible for carrying the cassava to the farmer's trailer.