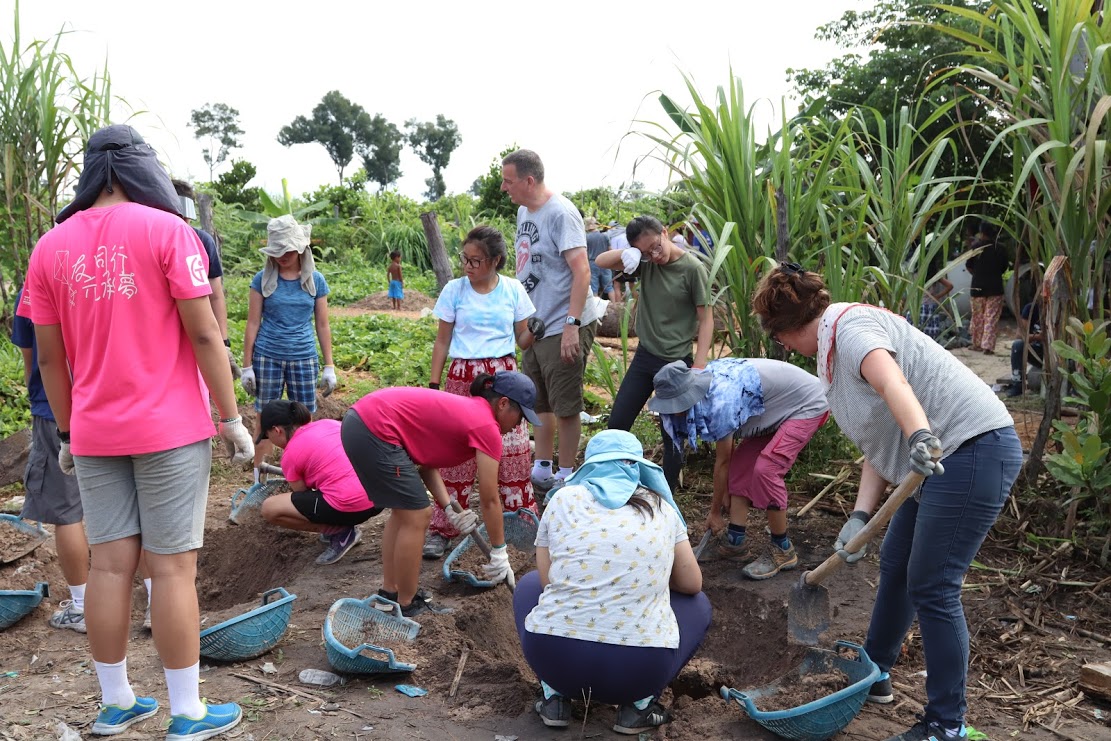 When we stayed at Camp Beng Mealea, we were involved in five different projects. Four groups took turns in participating in four projects during the two whole days we stayed there and we worked on a fifth project on our last morning, right before leaving the camp. The projects were teaching teaching local children English, building a concrete house for a disabled man and his family, making concrete water tanks for the local community and adding embellishments to a local school by building flowerbeds. Each project was an unforgettable experience as it allowed us to observe their way of living in a rural village of a less developed country.

The first project our group participated in was the English teaching project. This project was the most profound experience out of the four as learning about their school life and the education system of Cambodia led me to reflect deeply about our own education as students with abundant resources in a more developed country. There are government schools in Cambodia where children can attend for free. However, free education is only available until primary school. We volunteered in an English school, which was often funded by charitable organizations. The English school where we volunteered at works like a tutoring class in Hong Kong; there are regular sessions throughout the day and the students are allocated to classes according to their ability. However, due to its charitable roots, students do not pay a school fee. Students attend English school when they are not in public school (as public school is only half-day) or some may not even go to school due to family reasons.

Maybe due to the scarcity of education, most students find learning enjoyable and they are very attentive and hard-working even when they receive tasks or activities they dislike. A young boy, Vin, in my group told me he disliked reading story books as it bored him. One of the activities during class, unfortunately, was reading story books. Despite his hatred for reading, he still read very seriously and I truly admire his enthusiasm for study. Other than their enthusiasm for studying, they are very respectful and grateful towards elders and teachers. Local students of all ages greet their teachers respectfully when classes start or finish and follow commands as accurately as possible. According to Mr Han, the camp manager, the Khmer culture emphasises the respect towards elders strongly and many people believe that disrespect would eventually bring misfortune to the person. As a student, I find this experience particularly relatable and inspirational.

Other projects mainly focus on renovating and building infrastructures of the village. As teenagers growing up in an urban environment, most of us have never done construction work like making cement and making brick walls. It was a new and also physically demanding experience for us. Teamwork is shown during these projects as different people have different talents and weaknesses and we all have to be understanding and caring in order to finish the projects as soon as possible. During our house building project, we had to make large amounts of cement by mixing sand, water and cement with shovels and transporting the cement inside the house with buckets. Our group had people with all varying physical abilities, so we came up with a plan where people who are stronger would work with the shovels while people who are not strong enough would carry the cement as carrying the buckets of cement actually required less strength. This solution was a turning point for our project as we were all very tired halfway through and by this method, people who were shovelling would not need to worry about carrying cement and walking around while people who could not shovel could still be productive. The method allowed us to finish the project with a higher productivity.

Through these projects, I observed many things about their society that a normal tourist may not have the chance to know about. While making the concrete water tanks, I learnt about the water system in a typical rural village. Cambodia’s climate mainly has two seasons, a wet season and a dry season. During wet seasons, they have an abundant water supply due to monsoons and constant raining and flooding may even occur. On the other hand, during dry seasons, they would have insufficient water. Therefore, water storage has been an important challenge to them throughout history. Without modern water supply systems, villagers either use water from wells or collect rainwater during wet seasons and store them in storage tanks. Both methods are equally troublesome and dependent on the environment, making the villages more easily prone to water shortages during dry seasons. Building larger scale infrastructure like water processing plants and tap systems would cost a lot, but has to be done in the future whenever possible to ensure the stability and quality of water. The water situation led me to reflect on Hong Kong’s water system. Despite being seemingly stable with water supplied from China, our system is still very fragile and relies heavily on uncontrollable factors and relies solely on one source. For example, pollution, natural hazards and various political situations could all affect our sole water supply. Another observation that stood out was the government’s emphasis on tourism. Despite being in a rural area, there was a specially built and well-kept washroom with flushing toilets near our camp. This is a washroom specially built for tourists as a famous tourist spot, the Beng Mealea temple, was nearby. Tourism is an important sector of Cambodia but also a double-edged sword. Many Cambodians are able to benefit from tourism as tourists are able to boost many other related sectors of the economy and it provides many jobs. However, locals’ interest may be damaged if the government does not balance wisely and tourism also affects locals as crime rates may be higher and children may also be used as a money making tool as we observed many young children selling souvenirs and begging for money at tourist spots. Moreover, when people usually think about third world countries, it is easy and common to picture skinny kids with no food and no proper clothes. However, rural life in Siem Reap is vastly different (this may still be accurate in different degrees in poorer regions of Cambodia as Siem Reap is one of its richest provinces). Interestingly, most people, including both adults and children, often wear branded sportswear which are widely known and relatively expensive, for example, football shirts of famous clubs and huge international sports brand shirts. From my knowledge of Cambodia’s economy, it is home to millions of clothing factories. So, this clothing is maybe leftover or are excessively produced products from these factories. As a Geography student, this is an excellent example of the effects globalization has on less developed countries. Another example of globalization was the use of smart mobile phones. Many teenagers and adults we met at the camp and the village had cell phones and many of them are also smart phones which is in contrast to the typical “poor”, “material-lacking” stereotypes we have of less developed countries. However, again due to globalization, smartphones are becoming more and more accessible and cheap as countries like China produces and sells them for a much lower price. Many Chinese and Korean cell phone brand shops are also commonly seen in Siem Reap City.

This trip was a very special experience for me, as it was a chance to try to imitate living in rural areas of a less developed country as closely as possible. Despite all the huge differences in lifestyle and living environment, there are some surprising moments when our urban lifestyle and their lifestyle overlapped. As a devoted volleyball player, I was lucky enough to join volleyball games with the locals. The experience was both familiar and new to me, as the sport is what I do on a regular basis but I have never played bare-footed on grass. The experience reflects how simply we can achieve happiness with a limited amount of materials - all we needed was a ball and a net.